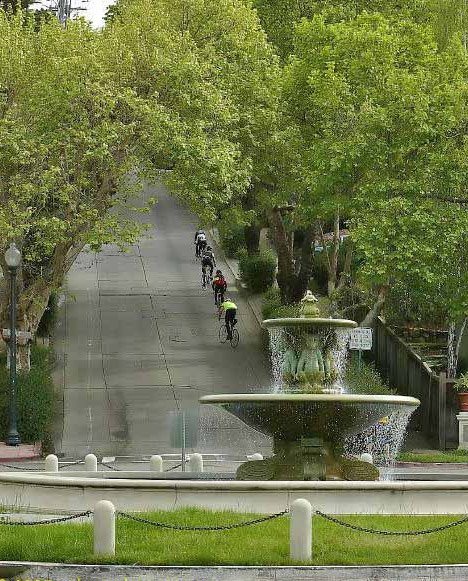 Update: April Fools Day. But what I have to say is not a prank. Sadly, I have decided to cancel the Nifty Ten Fifty this year. It is mostly due to the fact that it looks like rain all weekend. This will make the roads slick and less safe, even if people are willing to ride in the rain. I don't feel good about postponing for a week, as I feel the COVID-19 situation will be at it's worst in the Bay Area during the next 2-6 weeks. A late Summer or Fall event is certainly a possibility. And regarding the Nifty Mixty, currently the dirt trails are choked with hikers, so it is not practical to have riders on dirt trails. I am currently avoiding any dirt riding for that reason. Please stay tuned, and I hope for healthy times in the future for you and loved ones.

This is NOT a group ride. It is NOT the normal Nifty Ten Fifty format. This is a special COVID-19 edition of the ride, done solo, and starting any time during the day on April 4th and finishing by 6:00 PM. There is no registration, no sign in, no official start time, and no direct contact with other riders. All State and Federal Social Distancing guidelines will be observed. We may decide to shorten the course due to the request that riders do not stop for food, water, or bathrooms. If State or Federal guidelines indicate that the event should be cancelled, we will do so. Please check back.


Please read the information below carefully which includes information and recommendations on how to participate safely following Social Distancing Guidelines in the COVID-19 era. Pre-Flight notes will be updated as event day approaches. Obviously, COVID-19 is a moving target, and things could change in the coming days.

Elverton is still closed to vehicle traffic due to a slide that happened a number of years ago. It is passable by bicycle around the barriers without a dismount.

I will report on any road closures or issues before the event.

The Strava KOM for Thorndale will include ONLY Thorndale Dr. It will NOT include the uphill portions of Thornhill, Sobrante, and Elverton. Other Strava KOM's are Marin Ave, and Claremont/Grizzly all the way to Vollmer Peak.

There is a tricky turn onto a short bike path to connect to Eastway Dr. at mile 17.9. Don't miss it! It's smaller than a driveway!

Park water fountains and bathrooms on the course are closed, and there is NO FOOD on the course until Montclair Safeway at mile 37. Due to COVID-19, we recommend that riders bring enough food and water for the entire ride, and refrain from the use of public restrooms if possible. We suggest you do not stop at any public place.

Please be courteous to other participants, to pedestrians, and to motorists. You will encounter many hikers on the climb to Vollmer Peak. Please warn hikers of your presence, and pass slowly and carefully.

The ride is self guided, and riders may start any time after 6:00 AM and finish any time before 6:00 PM, so do upload the course below to your Garmin. Upload your file to Strava by 6:00 PM on April 4th in order to be included in the results.

There is a bathroom at the start, in the park above the parking area. The bathroom will be unlocked, but please prop the door open so it doesn't lock for the next user. HOWEVER, DUE TO COVID-19, WE RECOMMEND THAT YOU DO NOT USE THE RESTROOM IF POSSIBLE.

Be sure to upload the rwgps course to your Garmin. You may also wish to print out a route sheet. You can do this from the link for the gps file.

I am adding a new twist for this special edition of the Nifty. At mile 4.8 (junction of Spruce/Grizzly), if you drop down Canon Drive, and Climb up Central Park Drive back to Wildcat, you will receive a 5 second time bonus on Thorndale, and a 10 second time bonus on Claremont/Grizzly/Vollmer.

The Nifty Ten Fifty will occur on Saturday, April 4, 2020. The Nifty Ten Fifty will again travel the newer route that was first run in 2015. Please scroll down for information about the event. Riders will self guide on the newer, improved, easier to follow course. Please RSVP on the Official Facebook Event Page. If you have dumped Facebook, don't worry about the RSVP.

Do not download the 2014 course. Use the new 2020 course below. There will be no rest stop, but services are available after 7 of the 10 climbs, at mile 37 in Montclair, so do bring food for several hours, and some cash to resupply. There is plenty of water on the course in the East Bay Regional Park system. WITH THAT SAID, WE RECOMMEND THAT YOU BRING ENOUGH FOOD AND WATER FOR THE ENITRE COURSE, AND THAT YOU DO NOT STOP FOR FOOD, WATER, OR USE OF PUBLIC RESTROOMS.

Check out this video done by Chris Leavel at Peloton Magazine about the Nifty Ten Fifty. You may need to sign in with a free Vimeo account to view the video.

We will have a Strava KOM challenge on Marin avenue, Thorndale, and Claremont/Grizzly/Vollmer Peak, the final climb of the day, and the largest elevation gain. Marin Avenue KOM and QOM will track the best climbers with fresh legs on steep terrain. Vollmer KOM and QOM will go the riders with more endurance, those who have paced well over the day.

If you drive to the event, you'll need to get back to the start to fetch your automobile. Here is the Nifty Ten Fifty Return to Start. We encourage you to ride to the start. If the full Nifty seems a bit daunting, consider the Nifty Lite which is about 42 miles and 7,000'. Still a tough ride, with some difficult climbing. It's also perfectly OK to come out and ride as many climbs as you like, then leave the course and head home. Here is the Nifty Lite 2018 Course.

You can also read the New Nifty Ten Fifty Ride Description, a new, fully updated description for 2015 and beyond!
Posted by macpaulster at 9:07 AM No comments:

WE INTEND TO HOST A SELF GUIDED, SOCIAL DISTANCING VERSION OF THE NIFTY MIXTY IN 2020. TENTAIVE DATE IS APRIL 11TH. PLEASE STAY TUNED.
Posted by macpaulster at 8:25 PM No comments:

Great day on the Nifty Ten Fifty today! A small crowd, only about 20 riders, the smallest field probably since the first few editions beginning 18 years ago. This was entirely my fault — I didn't schedule the ride until a week before, and I changed the date to the end of March vs. the normal, always, forever, never changing, scheduling for the first weekend in April. A number of riders who would normally participate, were racing at Chico Stage Race this weekend.

But with that said, it was a small group, but a very fine group. The smaller group allowed most riders to decide between the front group, or my slower group, bringing up the rear. Both groups made an effort to stay together throughout the ride, regrouping at the top of each climb. And several riders switched between groups along the way.

There was one "official" stop along the way, the Safeway in Montclair. I was pleased to find the front group there, when my group arrived a bit later. In the past, some riders have skipped this social break, in favor of getting to the finish in an overly focused, and less social, manner.

We had three "KOM" climbs on the ride as usual, Marin, Thorndale, and Claremont/Grizzly/Vollmer. Nifty Vet Eric Chodoroff was able to clinch all three climbs, convincingly, other than the last one. Turns out Chodoroff overcooked a muddy, wet corner on the steep hiking path up to Vollmer. He took a tumble, and when his cohorts, at that time minutes behind him, came along, they apparently stopped to help rather than take the opportunity to deprive him of his perfect climbing record on the ride.

It would be virtually impossible for most riders to carry too much speed on that uphill corner, but Chodoroff's climbing prowess seemed to work against him here. Also, I think the ride organizer asked all riders to take it easy and be courteous to hikers along the path by keeping the speed down. Just sayin'.

Chodoroff eventually hauled his carcass back on the bike, and finished one second ahead of Dan Pannell, one of the riders who stopped to help. Fabulous camaraderie, gentlemen!

We had only two women on the ride, veteran Sarah Schroer and rookie Ekaterina "Katya" Rakhmatulina. Katya nipped Sarah on the first two climbs, while Sarah was quite a bit quicker on the final push up to Vollmer. Not sure if the 24 year old rookie faded at the end, or whether she had navigation issues, but nonetheless, the KOM awards are based on finishing order/points, and not on time, so Rakhmatulina takes the overall women's win.

The smaller crowd was in some ways really nice on this 2019 edition, but next year, I will make an effort to schedule the ride earlier, and perhaps return it to the traditional weekend in order that more riders will be able to err... enjoy this sufferfest.

A shout out goes to two veteran riders. First, Jim Frink, who first did the ride in 2008, and came back for two more editions in 2009, and 2011. After an eight year hiatus, Jim returned for this year's edition, his fourth time around the course, and rode very strong. Secondly, to Jay Wood, who claims the Lanterne Rouge award, though he was not last on every climb. At 64, Jay is the same age as Mr. Nifty himself, so I can relate to how difficult this ride is with aging legs. Congrats, Jay!

One final shout out to Gilberto Flores, who, according to his sign-in waiver is 69 years old. Gilberto rode strong all day, and if you look at the age/gender compensated results below, he "won" Claremont/Grizzly/Vollmer. Interesting note on the age/gender compensation. The female riders and older riders didn't seem to benefit much from the time adjustment on Marin Ave, early in the game, but seemed to place much higher in the later climbs. It may just be that Marin is a young man's game!


Overall Results, lower points is better. Your placing is your point total. Marin and Claremont/Grizzly/Vollmer count double. So a perfect score is 5 points: