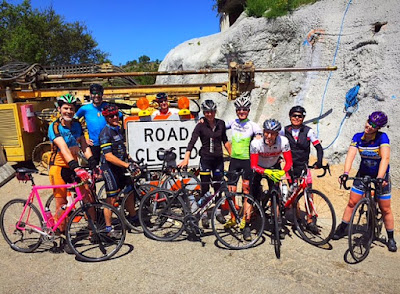 The Nifty Ten Fifty 2019, is scheduled March 30, 2019. The Nifty Mixty gravel ride is like Mavericks Surf contest. We wait until conditions are right, then announce the event a week or so prior. The window is typically mid March through end of April. We look for lush green conditions, with tacky surface, but after the rains have subsided such that there is little to no mud. We will see you at the Nifty Ten Fifty, and stay tuned for the announcement of the Nifty Mixty!

Posted by macpaulster at 5:30 PM 4 comments:

Scroll down for results.

If great weather, lush green grasses, tacky dirt surfaces, abundant wilflowers, and a friendly, adventurous group of riders, combine to make for an epic Nifty Mixty, then by all accounts, the 2018 edition was a smashing success. What made this year's event unique though, is that all levels of riders stayed more or less together all day, by patiently regrouping after each Sector.

Well, except for one rider, Alex Stevenson. Alex just came off a solid win at the Nifty Ten Fifty, the road version, just two weeks prior. And on the Mixty, he took off in the first 100 meters, and rode solo, and very fast, all day! We never saw him again. But hold on... the Mixty is an age and gender compensated event. Jennie Phillips, a 50-something woman, and former National caliber road racer, is learning the ropes of dirt riding, and was able to pull off the overall victory, by quietly finishing mid pack on all Sectors, then having her age/gender compensation applied as the results were compiled. The Silent Assassin as it were.

Charlie Huizenga, a 50-something male, and extremely strong rider, was launched into second place once the handicap was applied. This moved Alex into 3rd overall. As a twenty something male, Alex gets no handicap whatsoever, and though it would be hard to imagine anyone covering the course any faster, or more skillfully, it wasn't quite enough to eclipse the solid performances of the quinquagerians, Jennie and Charlie.

As far as overall winners, we've had 3 female Champs in a total of 4 Nifty Mixty's. Two were 40-something moms, one 30-something male, and this time a 50-something not mom.

The Lanterne Rouge award goes to "George Eagleton", at least that's his Strava handle. Does anyone remember "Eddie the Eagle," the underdog British Olympic ski flier? Maybe some relation? Results are determined by taking riders' 5 best placings on the 6 timed Sectors, i.e. one throw out. Lower score is better. Win all 5 timed Sectors, and your score is 5 points. George Eagleton racked up a solid 100 points, the only rider to score triple digits. And by golly, he did it with style, hitting that round number precisely. Congrats George! And if you think George had less fun than anyone in the top 6, you'd be very, very wrong. Heck, he even stopped for a break at a water spigot during one of the timed Sectors!

A far cry from the quagmire of mud we had on Wildcat Creek Trail in 2016, which claimed about half the field, Sector 1 was kinder and gentler this year — but not to Will Holzapfel. He broke a crank arm due to excessive power applied, not the first time this has happened to the 6'4" strong man. Not to be denied, Will one-legged it home, installed a replacement crank, and returned to finish the course in the late afternoon. Will gets the never say die, perseverance award for the day!

After a swift ride up Wildcat Creek, we regrouped and rode a sensible pace up Meadows Trail. We then tackled Sea View Trail, a formidable task on the gravel bike on this impossibly steep grade, with loose gravel, and a challenging rock garden. Those who chose to ride a mt. bike had a much better tool for this job, not to mention the many bumpy descents throughout the ride. Although the Mixty is intended to be a "mixed terrain" bike ride, truth is, it's mostly dirt, and there is no disadvantage to riding a mt. bike. We also had 4 single speed riders on course. Single Speed riders get an additional 5% bonus on top of whatever age/gender bonus they earn.

Next we tackled Skyline Trail in Sibley Park. There we ran into a bit of mud, but it wasn't too bad. This a gorgeous trail, and generally not well traveled.


Soaring Hawk was next on the agenda, certainly a favorite of those on the ride, and also not well traveled. The fun continues on Red Tail trail, before a fast run along Brandon Trail. By this time, it was getting quite warm, and riders were feeling fatigue and in need of water. One more climb up to Goldenrod Trail where we find a water spigot.

With much fatigue in the legs, riders enjoyed a relaxed pace along Goldenrod, which provides much shade and a smooth surface to ride.

One final push up Graham Trail, the final timed Sector brings us to the clearing at West Ridge, where we took a final group photo.

Many thanks to all the riders who participated, who were very social and friendly to fellow riders, and used the trails gently while respecting other trail users. And a special thanks to Charlie Huizenga, who not only finished 2nd overall, but also helped me with navigation, and herding riders along. I can't both lead the ride and run sweep, and Charlie always seemed to have my back, riding unselfishly for the good of the group. Already looking forward to next year!

Most of you are aware that the Nifty Mixty is an age/gender compensated event. Below are overall results with the age/gender/single speed factors applied, followed by overall, and compensated results for each of the six timed Sectors.

Announcing Prize money from the entry pool (smaller turnout this year means slightly less money, but we're keeping the $100 prize for the Champ):