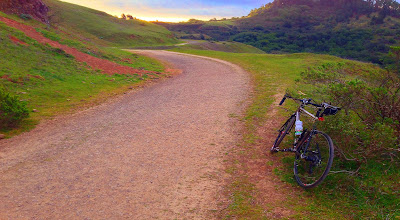 Nifty Mixty is a 46 mile mixed terrain adventure ride in the East Bay Hills with over 6,000' of climbing. There will be 9 timed Sectors, while the remainder of the course is neutral. Take your time on the neutral sections, regroup, socialize, navigate, etc. About 80% dirt and 20% paved. Most dirt is smooth and most (but not all) grades are not steep. The course is doable on a road bike with sturdy tires, however a gravel. cross, or mt. bike is recommended. The event is April 23, 2016, Cerrito Vista Park, Moeser Ln & Pomona Ave, El Cerrito, CA., 7:30 A.M, registration at 7:00 AM. Please check out the Nifty Mixty Facebook Event Page and RSVP if you are coming. Here is the Nifty Mixty 2016 Route. Check back for updated versions.

Below is a list of Rules for the Nifty Mixty:


1. This is a handicapped event. All riders compete on equal footing. I have scientific data that accounts for differences in gender and age. So if you are a studley Cat 1, 28 year old dude, you have the same chance as a fit, 60 year old woman who is age group National Champ.

2. This is a fun, mixed terrain ride with timed Sectors. Between Sectors is neutral. Rest, chill, eat, drink, socialize, regroup, chat, and have fun!

3. Be courteous to other trail users. Slow down, call out to hikers, and pass as to not frighten anyone. Say hello, Good Morning, and comment about how nice a f-in day it is! If you see a horseback rider, you MUST STOP! Ask the rider if it is OK to pass. And then do so slowly and carefully. No shifting, skidding, or any other movements or noises that could spook a horse. This is SERIOUS!

4. For each timed segment, the results will be handicapped and a leader board with placings will be determined. Riders will then have 9 scores with individual placings. The individual placings for each Sector will be added up, and the rider with the lowest score will be the winner. This means that all segments are weighted equally, regardless of length or elapsed time. It is possible, depending on accuracy of GPS data, that each rider will be allowed 1-3 "throwout" segments. Regardless of throw outs, a rider must complete the entire course to be scored.

5. Riders will be responsible for delivering accurate Sector times and uploading them to Strava by 8 PM April 23rd following the ride. If you have a Garmin 500, I highly recommend that you also bring your iPhone or Android device and record a second file. Garmin 500's have inferior GPS accuracy, and your iPhone is actually much better. If a rider has shitty GPS data, I will be unable to match segments and that rider will not be listed in results. Again, if you have a Garmin 500, try to take backup measures.

6. There are 10 Sectors on Strava, all labeled with Nifty Mixty Sector X (but only 9 will be counted). You are responsible to know where these are. The Sectors are designed such that there is little or no navigation required within the Sector. But it will be prudent to know where the Sector starts and ends. Sectors will start well after, and end well before any gates or obstacles, so plenty of time to get rolling at the beginning, and plenty of room to stop before the end. No need to impale yourself on a gate because you think the Sector ends there. It doesn't. Each Sector is called out in the Cue Sheet with mileage and a short description.

7. There are some downhill stretches in the Sectors. The safety of you and other trail users is of paramount importance. If you jeopardize that, you will be DQ'd or penalized. Read Rule number 3 again, please.

9. There will be a six place Podium with awards. All entry fees will go back to cash prizes minus any expenses to host the event. Prize money will depend on the number of entries. Entry donation shall be $10. This is a non profit ride.

10. Ride organizer will be listed in the results, but not eligible for official placing or prize money.

11. If a rider botches a Sector, that rider can go back and start again, but cannot go back to a previous Sector. So, if you flat or crash on a Sector, and wish to do it again, you can backtrack and have another go, as many times as you like. However, once you finish the next Sector, you cannot redo a previous Sector.

More rules may be added or modified at any time before the ride.

Well, the 15th Annual Nifty Ten Fifty is in the books, and what a great day it was! I want to start by making somewhat of an apology to all of you hearty souls. My personal life has been busy and challenging during the past year, and I confess that the Nifty didn't receive the level of attention that I normally would like to give to it. But the enthusiasm of the riders, and the fantastic weather, combined with the incredibly challenging course, put a smile on my face nonetheless. I'll be more attentive next year, that's a promise.

This was the second year of the new course — the event has gotten big enough that I decided that the "small groups with guides" model wasn't going to work anymore, so I simplified the course in 2015. Now, before you start laughing and falling off your chairs, the new course has about 20 less turns and, believe it or not, is far more intuitive than the previous course. Nonetheless, last year I learned that most riders skipped the Canon descent, and the climb past the Merry Go Round in Tilden Park after the Marin climb. It just wasn't intuitive, and many people missed it, though we did need the 300' or so it added to make the 10K feet. So I re-routed the ridewithgps file, but forgot to update the route sheet I was passing out. Oopsie. For anyone who did the "extra credit," well, I owe you a beer, or perhaps a free entry next year... or a time bonus... or something. The extra credit was descending Canon and climbing past the Merry Go Round, vs. taking a right on Wildcat Canyon from Grizzly Peak.

Last year, with the new course and self guided model, I had a start window of 8:00 AM to 9:30AM, thinking it would be good to spread the field. But by 9:15 AM, the start area was a ghost town, and Sarah and I started solo, and didn't see anyone for a long time. This year, I compressed the start window from 8:30 to 9:30. It helped, but we still had people raring to go at 8:00 AM, and we fought them off until 8:30 AM. Most were on the road well before 9:00 AM. Next year I will narrow the start window more, and start earlier, by opening registration at 8:00 and having the official start at 8:30.

Riders rolled out in perfect weather, cool and comfortable for hard climbing. My group started at about 9:35, well behind most. Some of the faster riders forged ahead while a few dropped off our intermediate pace. On Moeser, my friend Tom Williard hit and object and had a sidewall blowout. Tom had done the first five or so Niftys back in the day, then took a one decade hiatus. I was thrilled to see him back but was devastated that his ride would end in the first half mile. But in Nifty spirit, Tom booted the tire with a $20 bill, thinking it would hold better than a $1, and proceeded to finish a good bit of the course, finding my group at Peet's Domingo, and executing the final climb with my group. True Nifty Grit.

There is no point in going through all of the details of the climbs — most of you were there. But I cannot tell you how much I enjoyed this ride, and how great it is to see so many people willing to tackle this huge and unique cycling challenge. Our group was able to catch up to many riders on the course and we had a wonderful stop at Safeway in Montclair, consuming such delectables as sodas, chips, salami, sushi, and sandwiches.

People come from all over the Bay Area to test their mettle on the Nifty, always a good turnout from the Fremont folks, which I always appreciate, and others from SF and the North Bay. Thank you all for coming.

After a break at Peet's Domingo, we made the final push up to Vollmer Peak, where we had a good group of folks gathered. Thank you all for coming out and making the Nifty such an epic event!


Results are below. We had three rated climbs this year. Marin, Thorndale, and the final big climb of the day, Claremont/Grizzly/Vollmer.

Remember, if you haven't gotten enough Nifty-ness in your life, the Nifty Mixty is scheduled for April 23. In this also unique event, all riders are timed on segments, and rated with age and gender compensation. It is a "gravel" event, meaning you will need a road bike with sturdy tires, a cross bike, a gravel bike, or a mt. bike. Your choice. Stay tuned.


Overall results for Women. This title was calculated by taking the sum of the placings among women for 3 selected climbs, Marin, Thorndale, and Claremont/Grizzly/Vollmer. Marin and Claremont/Vollmer/Grizzly Count as double. The lowest possible score then, for winning all three climbs would be 2 + 1 + 2 = 5 points. Riders needed to complete the entire ride, more or less, and all three climbs. Additionally, you needed to have signed a waiver at the start in order to be an official finisher. Note that Sindy Cho was poised for a third place finish, as indicated by her first two times, and almost complete time on the third climb. She failed to make the trip to Vollmer Peak unfortunately, so is not listed in the results, but nonetheless deserves kudos for a mighty strong ride! Janet Gardner and Sarah Schroer had a close competition. While Sarah took Marin, Janet won the latter two climbs to clinch the title by 1 point. Arielle Little was just a bit behind Sarah and Janet, with Sindy taking some precious points away from her. Liza Hartlaub and Tara Kurihara had a very close competition, although they probably had no idea, since they were riding far apart.
1 - Janet Gardner 7
2 - Sarah Schroer 8
3 - Arielle Little 16
4 - Liza Hartlaub 21
5 - Tara Kurihara 22
6 - Dan Zhang 30