The Nifty Ten Fifty is a difficult bike ride in the San Francisco East Bay Hills. The ride explores ten steep climbs, meandering back and forth, up and down, through neighborhoods and parks. 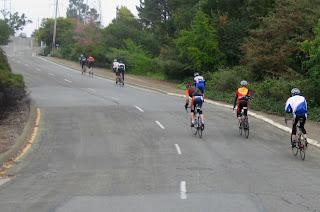 This was the fifth annual ride, which takes place on the first Sunday in April. About two dozen brave souls showed up for the ride this year. There was a "B" group that left at about 9 AM, and an "A" group that left at 10. The idea is that the faster "A" group will eventually catch the "B" group out on the course somewhere to share painful stories of grinding up the steep climbs.

A rest stop, consisting of a car parked strategically on the course, serves the riders with food and drink at the half way point. 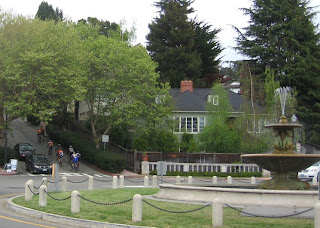 This year's "B" group was led by Janet, as the planned leaders, Sid and Linda, were given the wrong start time. Oh well. It all worked out. Aside from the two main groups there were those who went out on their own to attack the course, including Bill, Mike, Brian, and some others. We had four women on the ride this year, which is a great turnout!

Also of interest is that we had five riders
from our new race team,
Cyclepaths/Wild Cherries Racing.
You can view our race blog here: www.cwcracing.org/blog 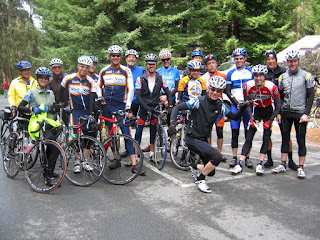 Deven brought a couple of his friends from the Dulce Vita Cycling team. Also showing up were two of my endurance cycling friends from Folsom area, Jim and Graham. Also, Europe riding buddies Kevin and Lesley were here. Needless to say, having the racers along made the "A" ride pretty darned fast. I struggled all day to keep up with the group I was supposed to be leading, but it's nice when they pretty much have to wait for you. With over 100 turns on the ride, it's much easier to follow someone who knows the route rather than trying to follow the route sheet. 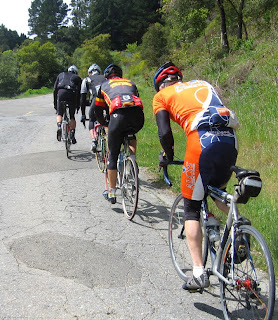 Conrad grabbed the KOM title on Marin Ave, which is a .75 mile climb averaging 18% with an extended section of 22% average near the top. He nipped Justin at the top while another teammate Nate arrived at the top in third.

We ran into most of the "B" group at the rest stop and gathered for a quick photo. Near the end of the ride we had our mandatory stop at Peet's Coffee on Domingo St. in Oakland. Our stop this year seemed longer than usual as everyone enjoyed the sunlight, coffee, conversation, and bakery pastries. This again allowed some "B" group riders to catch up, making the Peet's group quite large. 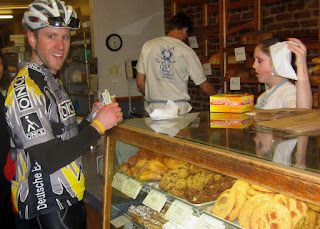 After that we all headed up Claremont/Grizzly Peak/Vollmer peak for the last, and longest climb of the day, gaining 1500' and featuring a 28% kicker at the top. Just what the tired legs needed! We climbed 10,050' in just 54 miles. The descending was super fun on this day with our competent group. And the and food aprés ride at the Pyramid Brewery was a nice finish to a great day on the bike.

As is the custom, some riders did their own variation of the ride, or broke off early 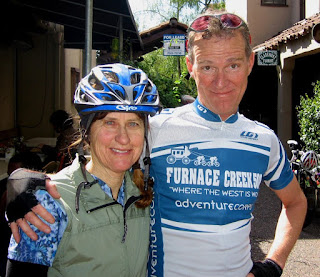 to get back home to take care of other commitments. We had a little mist and some wind, with cool temperatures, but all in all it was good ridin' weather and great company. See you next year!
Posted by macpaulster at 7:58 PM