Note: See Bill Oldham's B ride write up below... 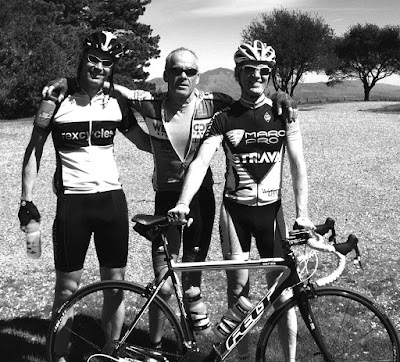 
Just a great day out there all around. Some thanks in order. First to Bill Oldham, who led the large B group through the ride. There were about 20+ riders in this group with varied ability, and Bill's efforts were much appreciated. The fact that he somehow managed to guide 13 of those riders to the summit at Vollmer Peak for a photo opp (see below), is nothing less than flabbergasting, a testament to his guiding ability and patience. Thanks Bill!!

Send along some comments if you like. The Nifty light group was small with just 3 riders, as was the A group with just 3 riders. Looking at Strava data, looks like there were at least 4 "A" level riders who did the ride just in front of our group but elected to not be part of the ride, or perhaps started with the B group and just rode off the front.

Also thanks to Janet for leading the Nifty Lite ride. And... to the weather gods who delivered probably the most Nifty biking weather imaginable, with sun, cool temps, and clear views of the bay. Special thanks to my friends at Clif Bar who donated some of Clif's awesome energy products to the event. You sampled some of the best cycling food on the planet! Finally, thanks to all who made the voluntary $5 donation. It is much appreciated and will help keep the ride going in the future. We'll be adding photos and stories soon. Send us yours (photos and comments) to macpaulster@gmail.com

Many riders were able to use the GPS data from the site to follow the course. The feedback I got on this was very positive. Please pass along your experience with following the course with your Garmin to me. I envision by next year we'll see a lot more Garmins out there, enabling riders to set their own pace on the ride, and leading to less waiting and re-grouping.

Our A group riding time was 4:30, pretty typical and considering the lack of conditioning due to challenging spring weather, we've got to be happy with it. Kevin Keenan was the strong man of the day, taking all the climbs, including the KOM on Marin in just a few ticks over 8 minutes.

A small group of 6 enjoyed Pizza and Beer at bicycle friendly Lane Splitter Pizza in Berkeley post ride. We're all very happy with the day. Stay tuned for more...

B Ride notes by Bill Oldham 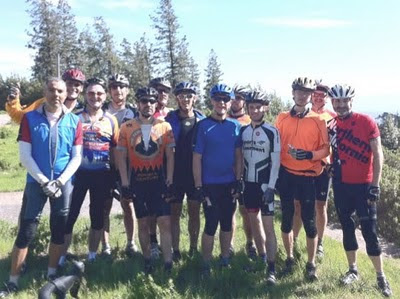 B Group Finishers on the summit of Vollmer Peak.

So after the 2009 debacle when the B ride finished before the A ride, the rules were changed … only a ½ hour lead time instead of 1 hour. But the big change this year was the popularity of the ride. Instead of the usual half-dozen or so riders, we had approximately 20 starters in the B group. I say approximately because the numbers fluctuated during the ride … with some leaving early, a few starting late, and the usual stringing out of the riders on the climbs, we had 13 riders with the leader in the first couple of climbs, but by the 4 climb had 19, and at one point 20.

Great participation by Davis bike club with 4 or 5, a Pleasanton group with similar numbers and a rider all the way from Costa Rica, just to join this elite event! There were only 2 of us, I believe who had done the ride before (or would admit it), and all but one attempted Marin. Even Fast-Frank Metzger, with his 39/25 real man gearing, made it up Marin, congratulations! Only a couple of folks had to walk the last block.

With such a large group we were slow in clock time and sure enough the A group caught us by the top of Marin (3 climb).

I believe we had 13 coming up El Toynal, reconnecting with another 6 at the top (who by going ahead did not benefit from our steeper, more direct route via Loma Vista and Alta Vista), safely negotiated Grizzly Peak, dodging the bicycle-swallowing holes, and wound our way down through Berkeley. I admit skipping the traffic on Euclid in favor of La Loma, so we cheated by at least 50 feet, perhaps 100. First bad tire on Centennial (later another on Canon and a pinch flat on Grizzly). The food and drinks out of Paul’s car were very much appreciated (and decimated).

After the Tilden loop and South Park, the Davis group came to their senses and headed directly to Peets, but we continued on with our smaller, more determined team. A sensible descent down Sheppard’s Canyon, and refreshing rides up Snake and Broadway Terrace, led us to the decision point at Charing Cross, with 2 folks wisely taking the short cut, and by Peets 3 folks heading home. I believe we still had 14 caffeinated enthusiasts racing for the finish (but not all leaving Peets at the same time). In the last group to leave Peets, about 6 o7 of us, Roman Urbina dusted
us both on the Claremont warm-up and on the steeps of Volmer Peak (ouch). I attach a photo of the group (less the photographer) at the top.

Thanks so much to Paul for arranging the ride and finally delivering the most ideal
weather imaginable. (And for some great pizza after the ride).